Time for a long over due update! It's been a while, but now I am back to making somewhat regular progress on the map. As you can see I have added a bandit camp and some bandits along the highway. Oh and special thanks to the mappers on mapping help for explaining how to get around the default damage filters. 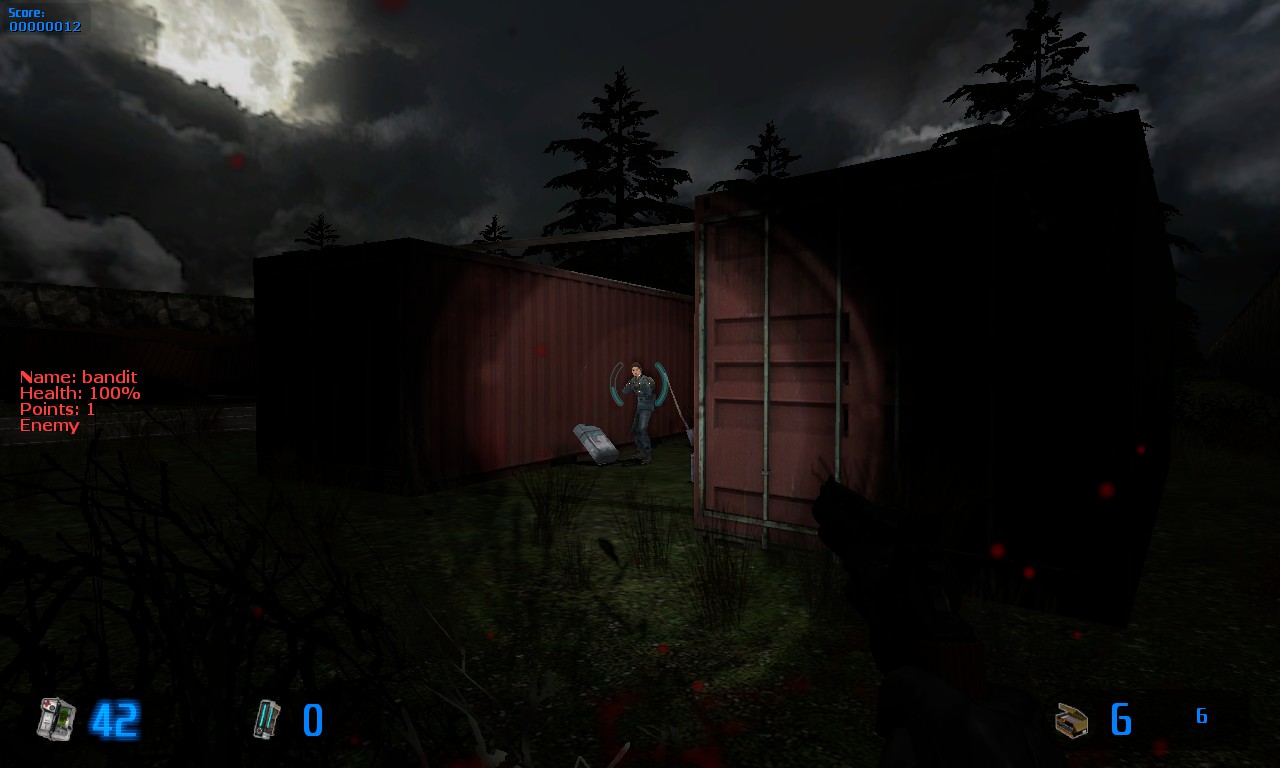 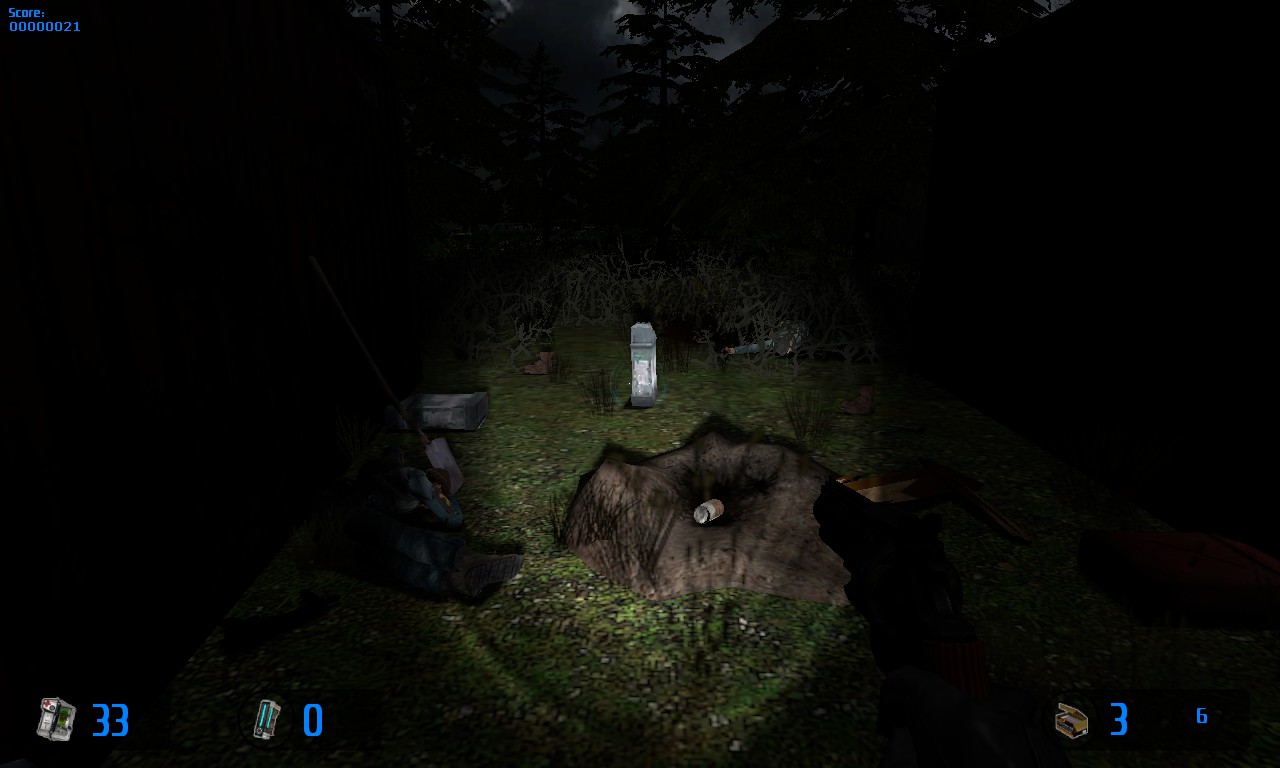 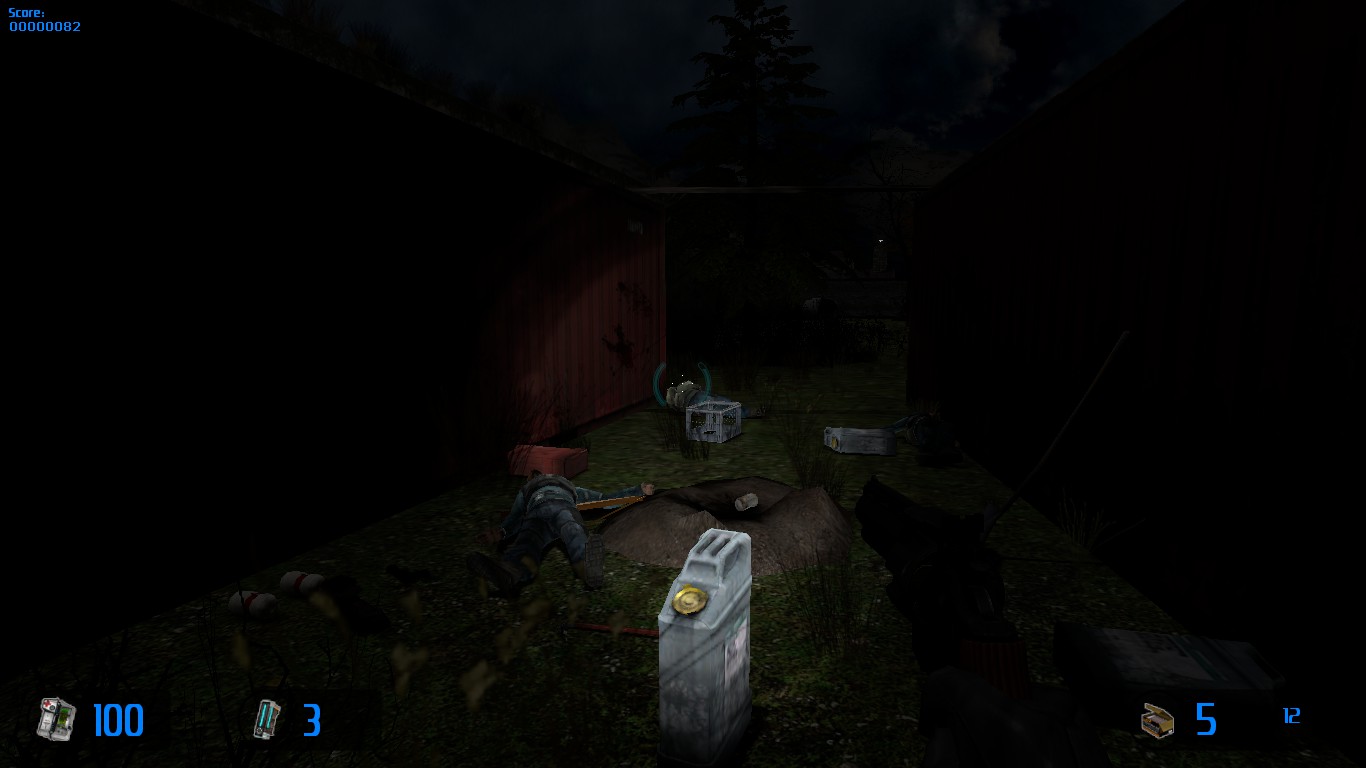 The first time going down the highway will be the hardest, because there will be the most bandits possible at that location. After, they will respawn at a rate of 1 (max alive in that location) every once and a while. The bandit camp covers a bit more area than that one part in the screenshots.
Last edited by Umbrae on Sun Nov 05, 2017 11:16 pm, edited 1 time in total.
~Umbrae~
Top

Here it is, another long over due update...

A lot of stuff has actually been happening with this map since the last post I made. The focus of the map has changed slightly to encompass more of a storyline. Anyways without further hesitation, here's what I've been working on.

So after a long journey from the farmhouse down the highway, killing zombies, and bandits. Weaving around the scene of desolation, around crashed cars, through the dark wooded area, you finally come to, could it be? Civilization? Of course, don't worry, you won't be able to enter the town without first surviving the event at the gate.

You're greeted by someone up on the makeshift battlements. 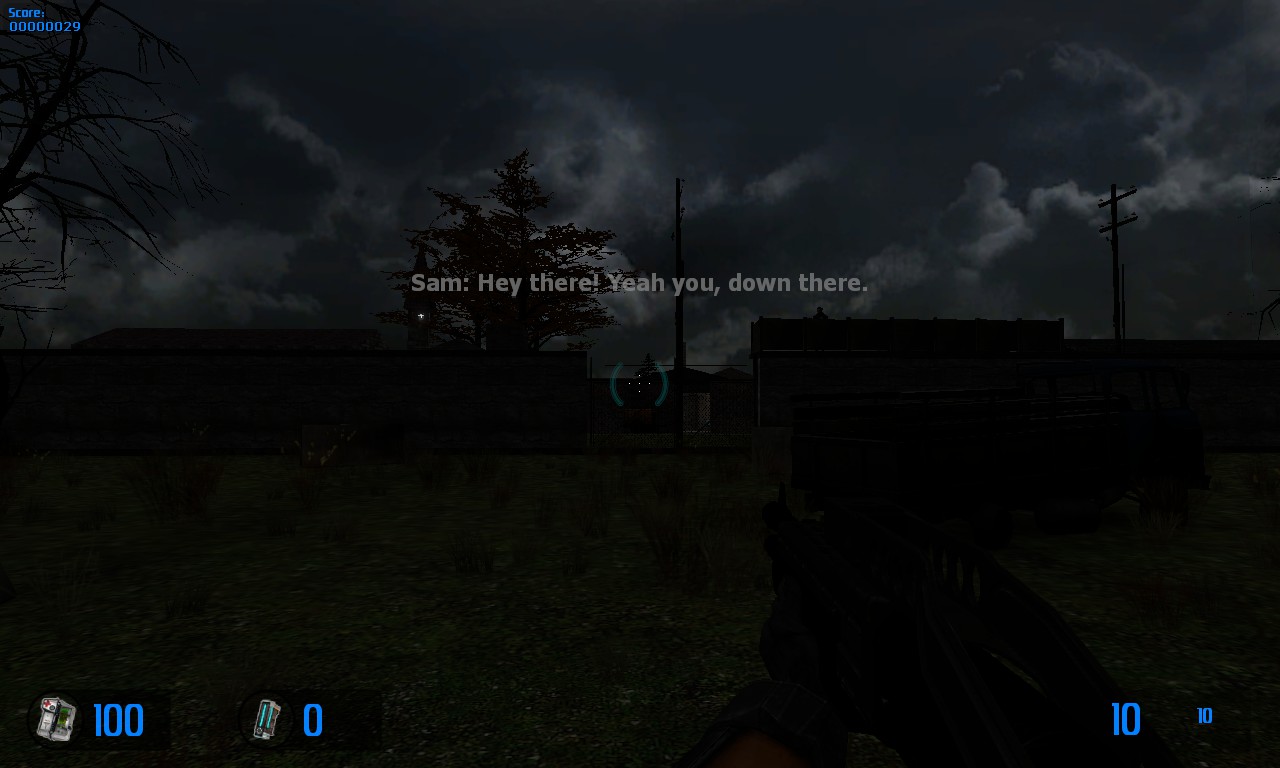 Of course it is only logical that he would assume that the random armed stranger running out of the forest could possibly be a bandit. Luckily for you, they rigged the train tunnel that has been housing bandits with explosives. Now you get to help defend the gate as they come running out aware that the tunnel is about to blow. You only have to defend for a good 30 seconds (which is actually harder than it sounds if there aren't very many people), against a lot of angry bandits. 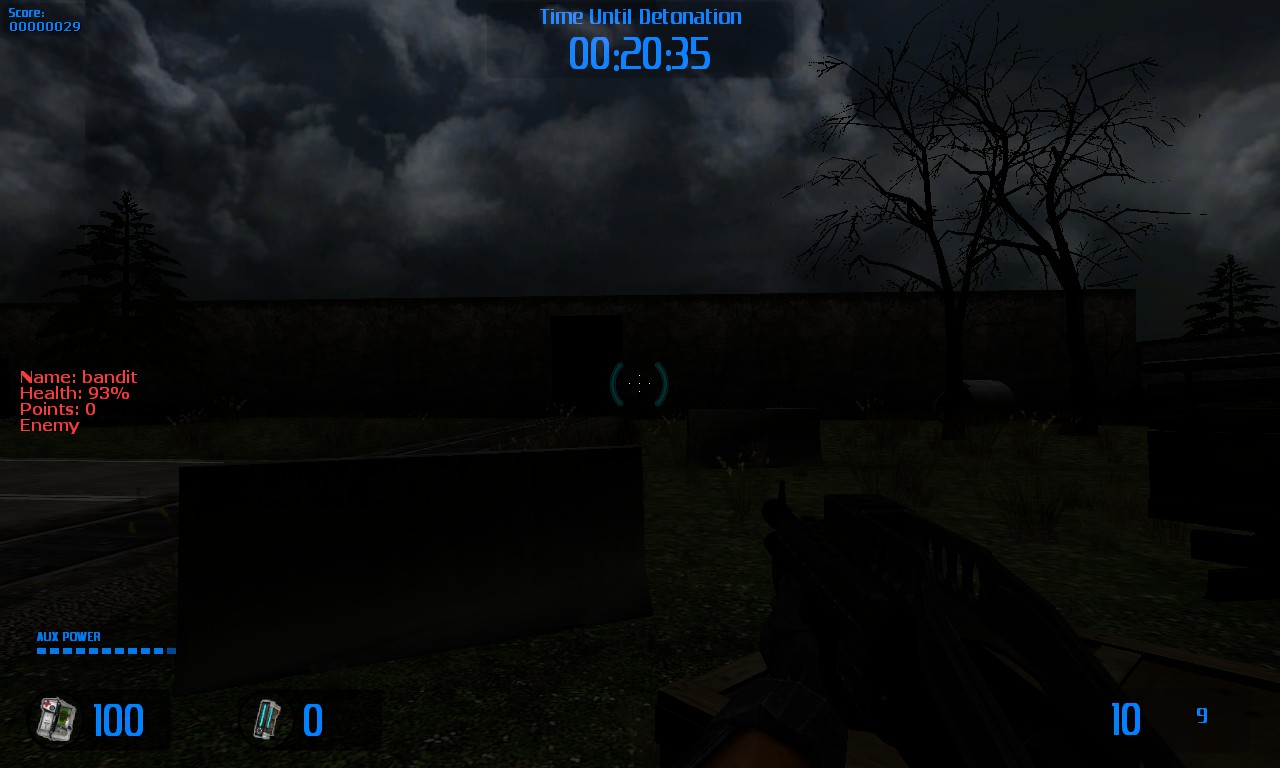 Finally the tunnel blows, killing any unfortunate bandits that didn't make it out in time, and of course you get an apology (and a bit of a discount on arms, but more on that later) from Sam.

You also gain access to the town, and a cut scene giving you a run through of the map ensues. 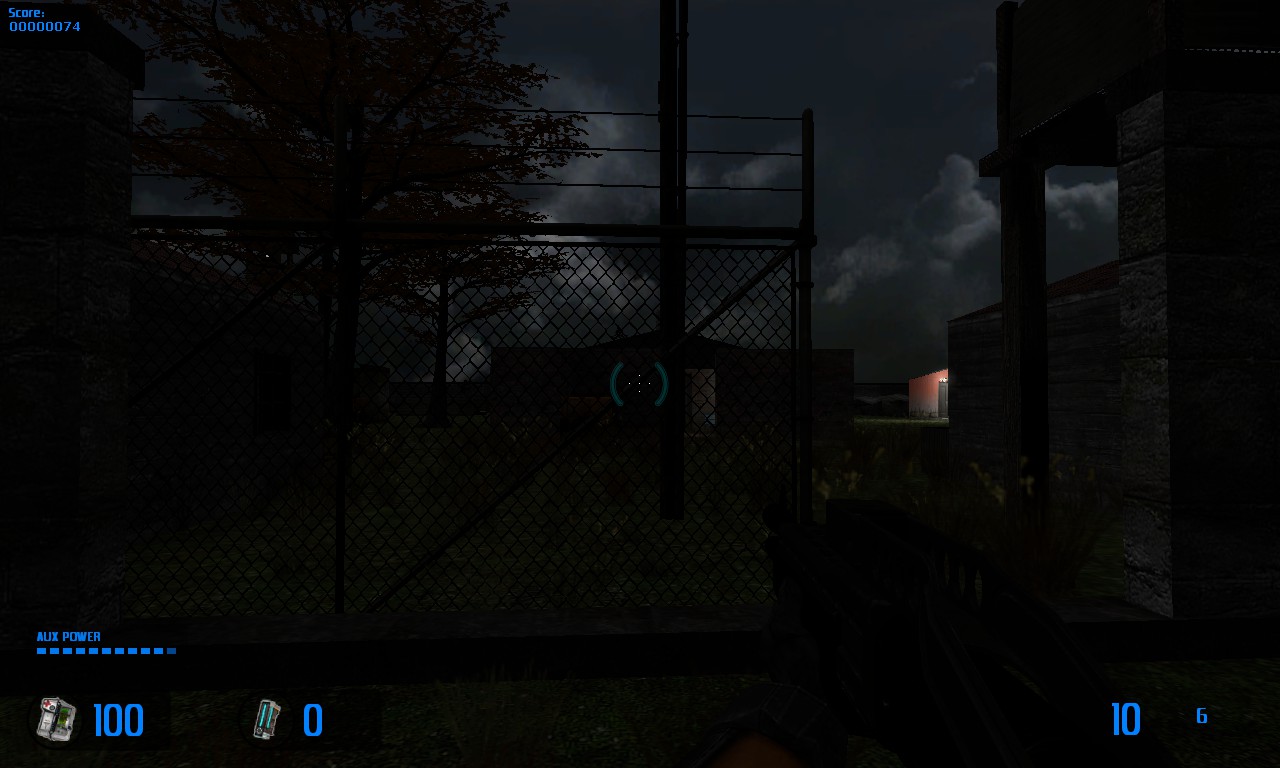 Now you have cleared the highway and have access to the town, without any surprises, aside from the occasional bandit or zombie. Congratulations, after all of that now the real map begins.

This is probably the biggest update for a while. Updates in the near future will consist of mostly interesting features, such as upgrades for the house, being added. The next big update will probably happen when I add the next big area. If anyone has any suggestions or comments so far, please feel free to post them. Any feedback is appreciated.

Is starting to get interesting, although you could give more detail to those brushes.
Click on my photo to add me into your friends in Steam

Might wanna polish it once you get into the later stages of development,
maybe add a couple rock props surrounding the tunnel entrance if you don't wanna turn it into an actual displacement
Top

"I remember it like some long forgotten dream, from a forgotten lifetime..."

Now that I've "finished" (I'll be going back to edit in small improvements constantly) the kind of prelude to the map; it's time to start adding in updates for new content. I can't think of a better way to start than adding a fully functional new class, that will greatly help in dealing with those annoying bandits. I present the next class, soldier.

So... After good 7+ months I'm finally back to work on this map, and making progress. At the rate I'm going I'm just going to say it will be done when it gets done.

Anyways, he's some screenshots of what I've been up to.


Some minor tweaking on the clinic exterior

Clinic inside side view

Minor tweaking to outside of farm... the next main update will be on the farm

Hmm... I think I'm going to change the skybox to the NH2 one since I am using NH2 content, and the default OC night skybox texture has some seam issues.
~Umbrae~
Top

It looks good, although replace that red cross that is from a waypoint, it looks ugly. That custom skybox is not done well, and their seams are visible.

Remember to give credit to the Nightmare House 2 mod team, is their only requeriment if someone wants to use their stuff.
Click on my photo to add me into your friends in Steam

Wow It's been a while, almost a year. After completing my yearly play through of Obsidian Conflict Halloween maps, I was actually thinking about this map. It's been a long time, but I was thinking of getting back to mapping to an extent. As with most of my projects, I've resolved to complete this map and oc_turmoil sometime; exactly when I don't know. Since I'm currently at college, I'm not really able to work on my maps until I transfer them over computers. However, with a break coming up I'm hoping to finally resume progress (again, to an extent). So, hopefully there will be some new updates soon.

In the mean time though, Happy Belated Halloween!

Good to hear. Although I never liked Harvest-type maps, I always saw on this map a good chance to do something better.

I should also return to mapping, Vicarious Traumatization isn't going to be fixed/extended alone...
Click on my photo to add me into your friends in Steam

Welcome. You are back with us.
Current Projects:
oc_Maestro Fénix_HeadCrabD_Nz(just for boring)
oc_der_riese(don't even think about it.)
oc_nacht_der_untoten （work again!)
(also,you can see some pics about this map on my moddb blog.)
http://www.moddb.com/members/headcrabd

Finally an update! I've done a decent amount of work on the map recently, so here's an update of some progress. I've been mostly working on map mechanics and as a result won't have much in terms of screenshots for a while. However, I've added a new class. Here's a screenshot of the latest class: sniper. One of the weapons in the screenshot is missing textures due to mounts not working for Obsidian Conflict. Hopefully by the time this is finished mounts will be fixed.

I'll probably be back to work on this sometime in December when I'm on break for a whole month, since I'm realizing just how time consuming it is. Also, thanks it's good to be back.

Umbrae wrote:One of the weapons in the screenshot is missing textures due to mounts not working for Obsidian Conflict. Hopefully by the time this is finished mounts will be fixed.

http://obsidianconflict.net/forums/view ... f=1&t=5106
Click on my photo to add me into your friends in Steam

Wow, it has been a while. I don't know if anyone still checks the forums or what the state of the mod even is. It has only been like 3 years since I last worked on this map. Due to a combination of college and other projects not a whole lot has happened, that is until now. For whatever reason I'm back to work on this map (and oc_turmoil). When I first started working on both maps I promised myself I would finish them, and I still plan to keep that promise. I have been teaching Hammer Map Editor in the summers and I have gotten a lot better, to the point that I finally have the skills and the patience to add some of the more complex systems that made me quit 3 years ago like farming. And so, after a long time I present you with a mound of dirt: 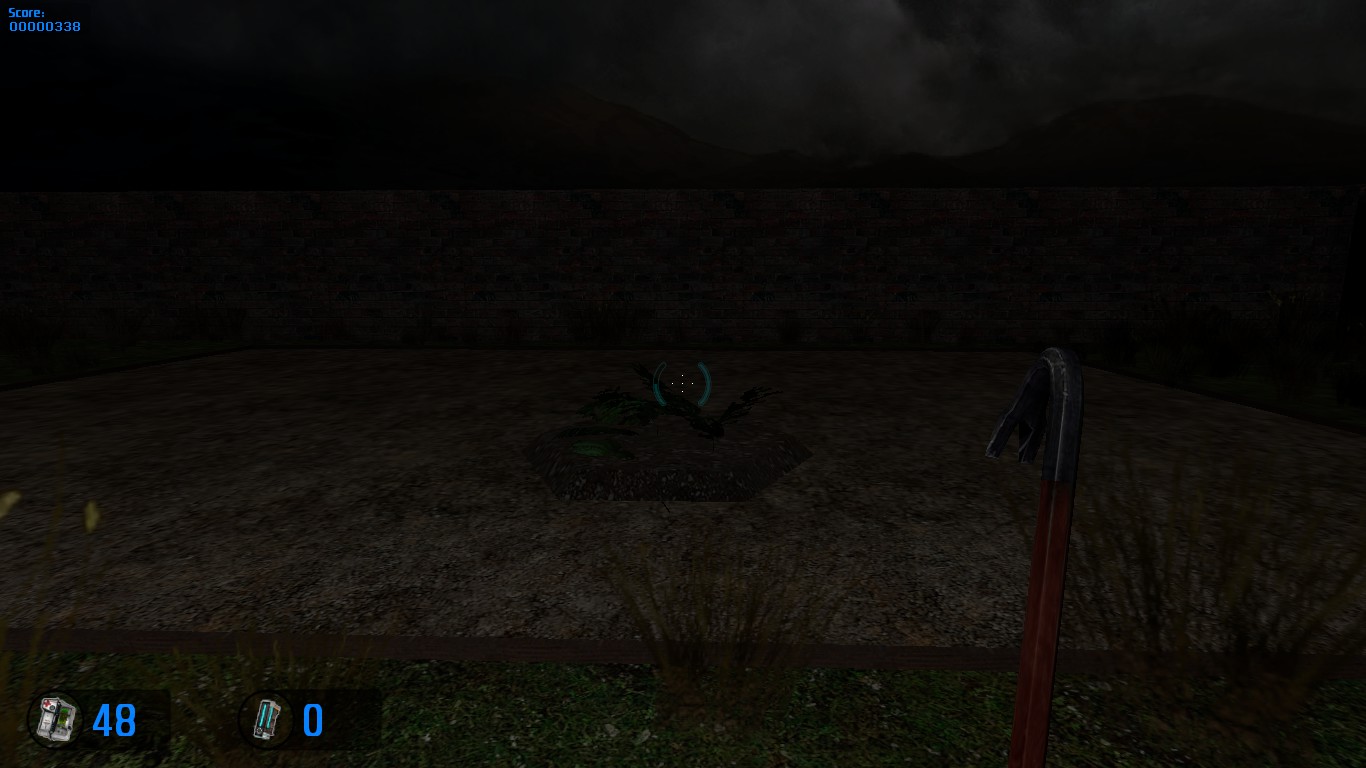 And finally a mound of dirt with some melons: 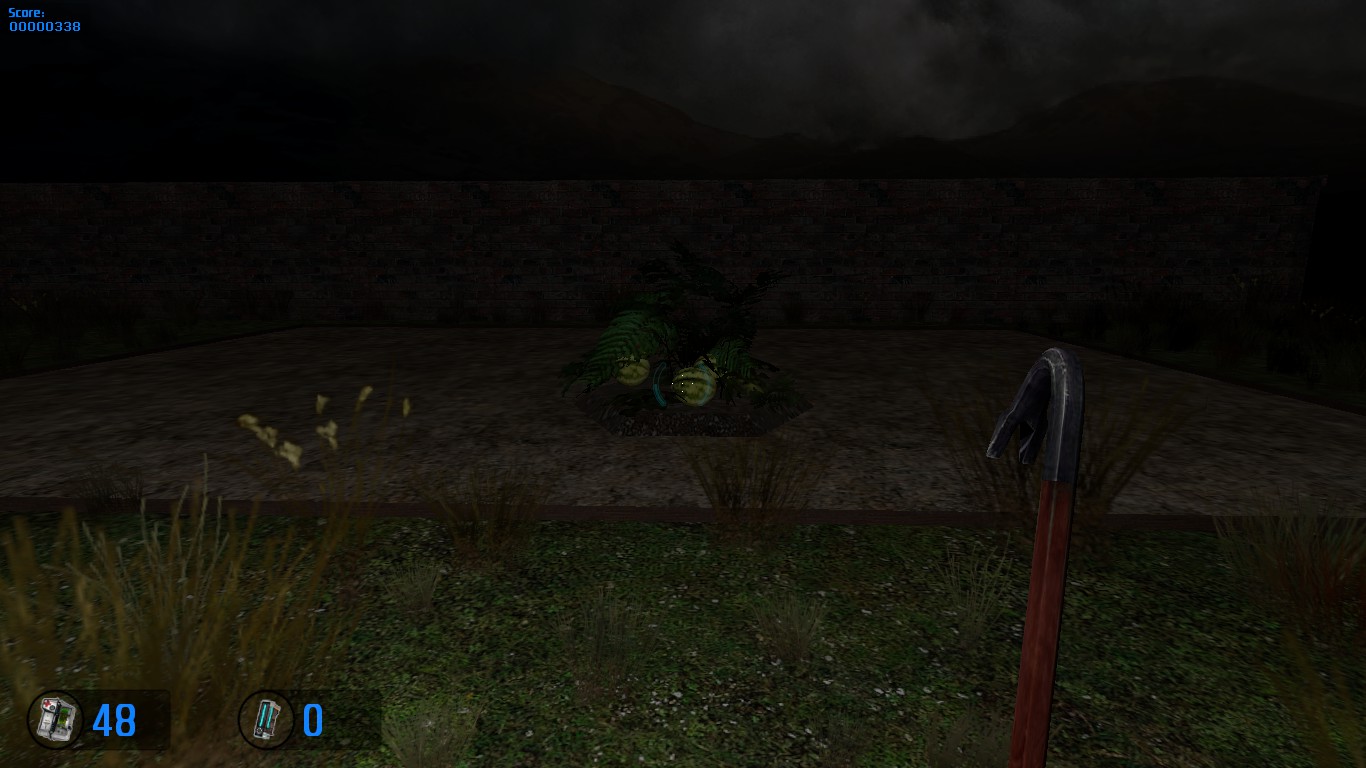 Now that I finally have some sort of a farming system, I'll be able to continue work on the rest of the map. The plot moves!
~Umbrae~
Top

Oh you still alive. We are more active in our Discord rather than here, but from time on time we still checking this place.

https://discordapp.com/invite/K9CFT9P
Click on my photo to add me into your friends in Steam